Construction was completed May 2009.

Poole’s beaches following the replenishment project 2005/06 was wide enough to function as a coast protection structure, and controls were required to ensure it remained that way for as long as possible.

In 2008 planning permission was granted to Poole Council’s Coastal & Drainage team for the construction of five new rock groynes at Branksome Chine and Branksome Dene Chine, each measuring between 45m - 75m in length.

The contract was awarded to Dean & Dyball (now Balfour Beatty); construction work commenced 24th November and was completed on 5th May 2009.

Some 20,000 tonnes of rock were delivered to the beach by low-loaders transporting up to 500 tonnes daily via the car park at Branksome Chine.

New Safe Swimming Zones will be created between the new groynes using yellow markers. These RNLI approved zones have been successful at Sandbanks.

The choice of rock groynes for this project followed more than three years of detailed investigations and analysis by HR Wallingford.

Engineers from Italy, Holland and New Zealand were involved in the first stage of the study which considered more than 20 options for beach control structures. A final report recommended four options for detailed consideration - three groyne options and one submerged reef option. An economic appraisal concluded that rock groynes were the preferred option.

This project at Poole is a move away from the traditional coastal protection scheme in that a post project appraisal and programme of beach monitoring is being funded by Defra as part of the overall scheme, and will compare outcomes with computer modelling by HR Wallingford. The results will inform Environment Agency research, and help the refinement of beach plan shape models in the future.

During this project large excavations were made at the back of the beach for construction of ramps. There foundations were taken to below the level of sand before beach replenishment (2006/07).

Ramps allow access across the beach for, for instance, the beach rake and tractor. They also provide access from the promenade to the beach and the groyne walkways, and allow easier access for the less able and those using mobility scooter or wheelchairs, buggies and prams. The size of the excavation is due to the working area required to provide the long 1:20 slope that complies with Disability Discrimination Act (DDA) regulations.

During construction sand from the excavation was placed seaward to give protection to the workforce and the working area. Once construction work was complete the sand was replaced in the excavation trench. Current beach levels mean that the majority of the ramps will be covered by sand but the extent of the ramps will ensure they can be utilised if / when beach levels drop. 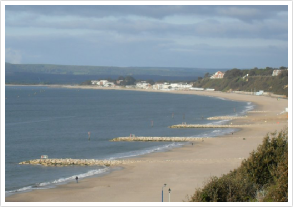 Five new rock groynes, of varying lengths, between the Chines at Branksome Beach 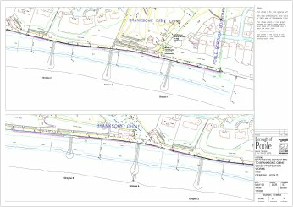 The groyne plan shows the position and relative size of each of the five groynes. The plan is too large to display on this page, but a pdf version is available 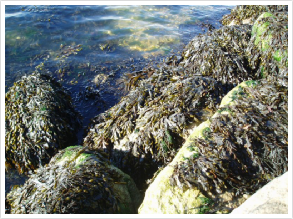